The Honda NSX is the rebirth of an icon representing the ultimate combination in power, sportiness and efficiency. Dubbed the new sports experience, it was developed under the concept of a "human-centered supercar".

A car that puts the driver first in every aspect of its design, the next-generation NSX leverages its state-of-the-art hybrid supercar power unit, body and chassis to deliver exceptionally intuitive and immediate response to driver inputs.

"The process we used to design and develop the new NSX was directly inspired by that of the original. This was because we wanted to keep the purity and function-inspired form, and deliver a truly unique and exhilarating driving experience." Michelle Christensen - Executive Design Project Lead 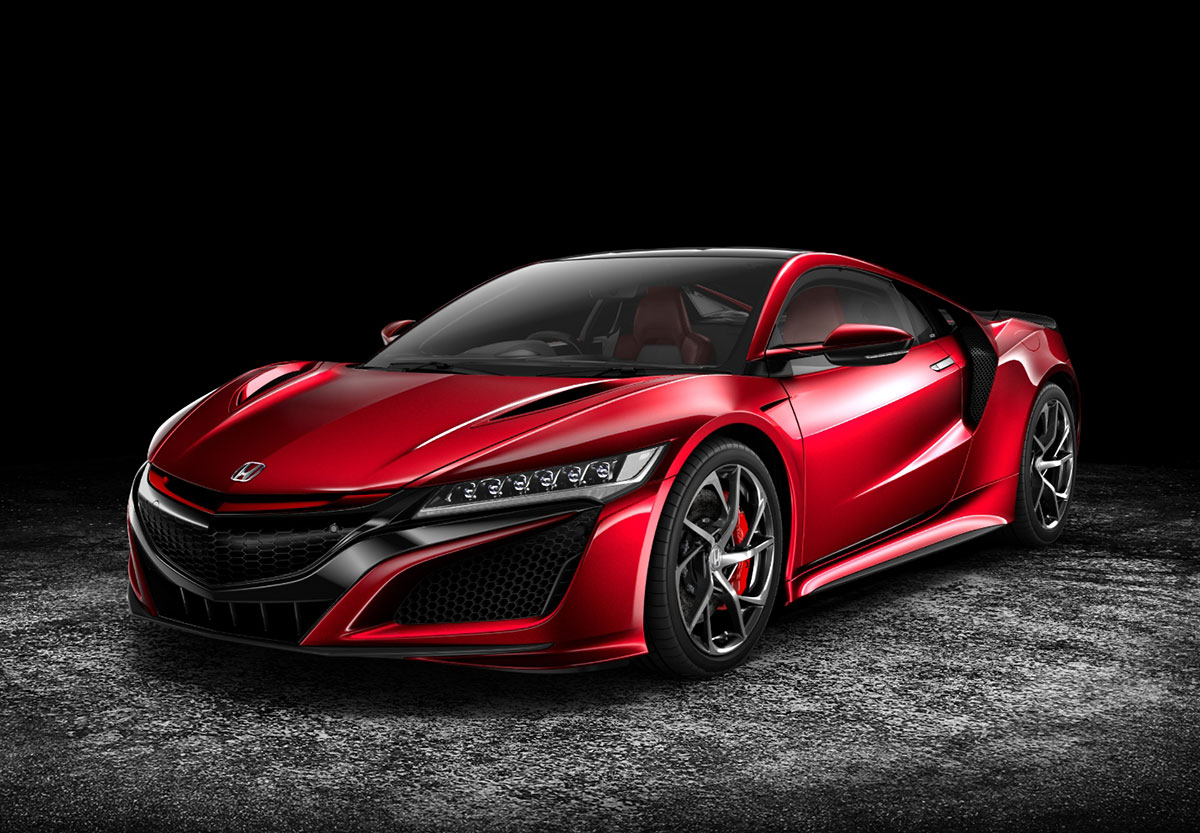 The touch of leater

The touch of leather 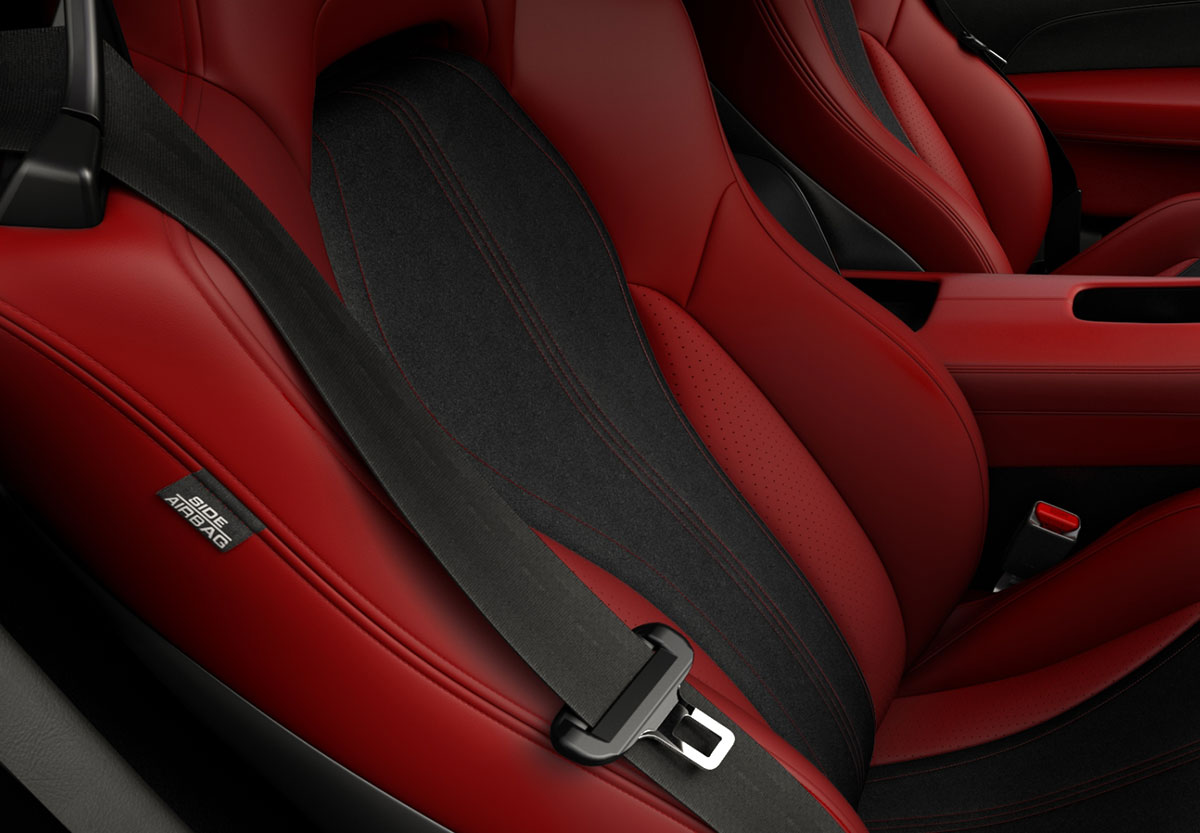 The NSX has been designed from the inside out with an uncompromising focus on the driver. 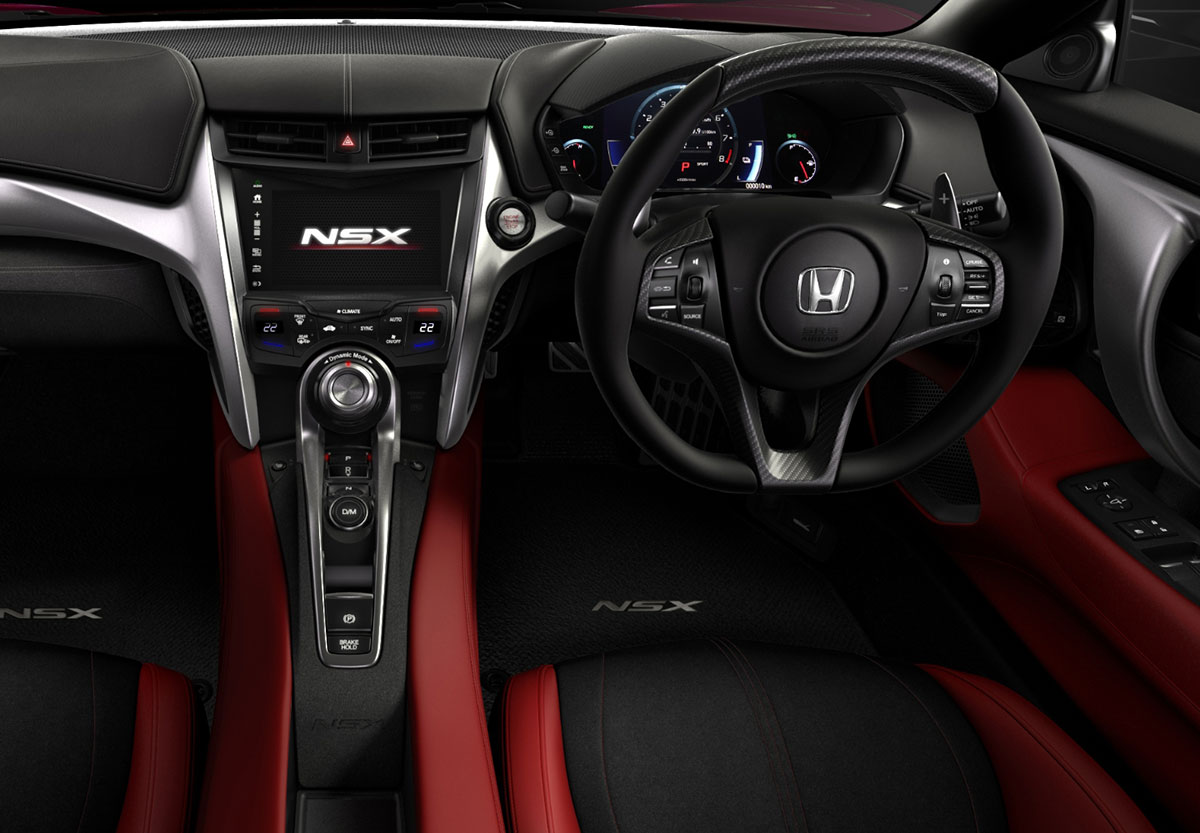 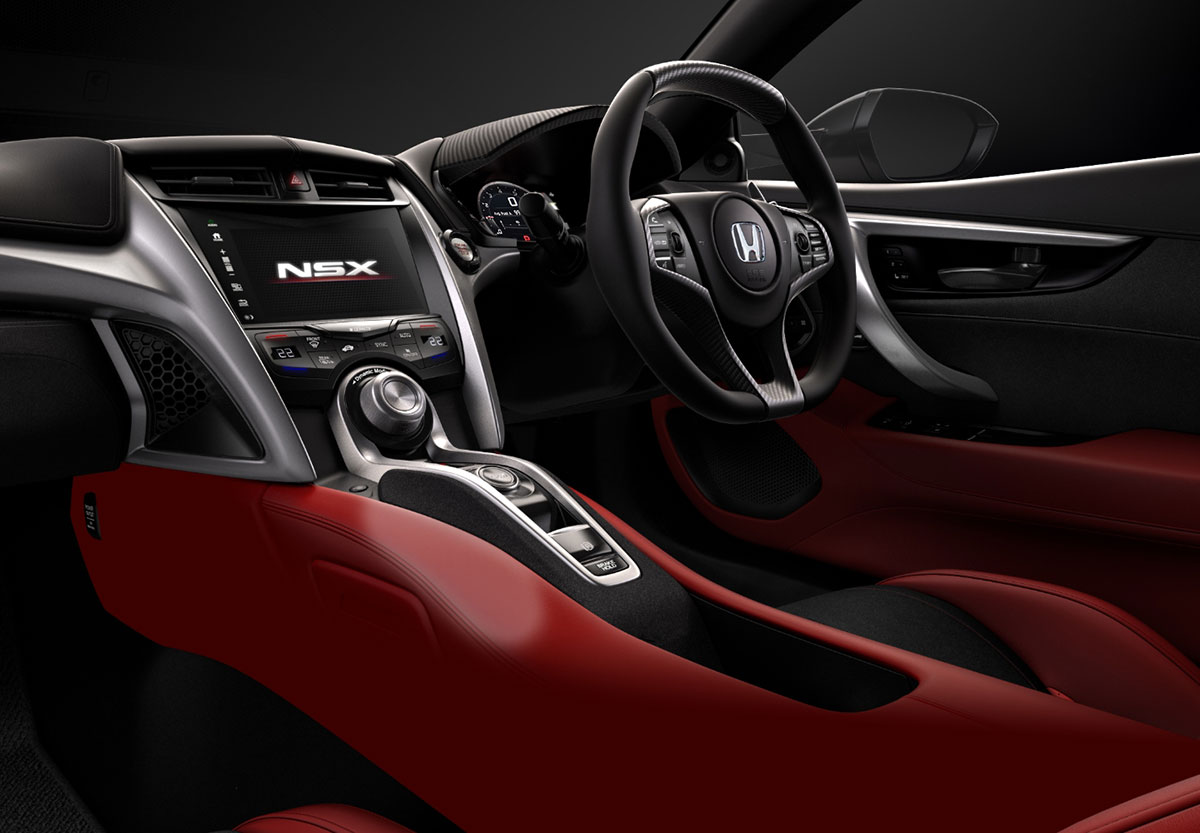 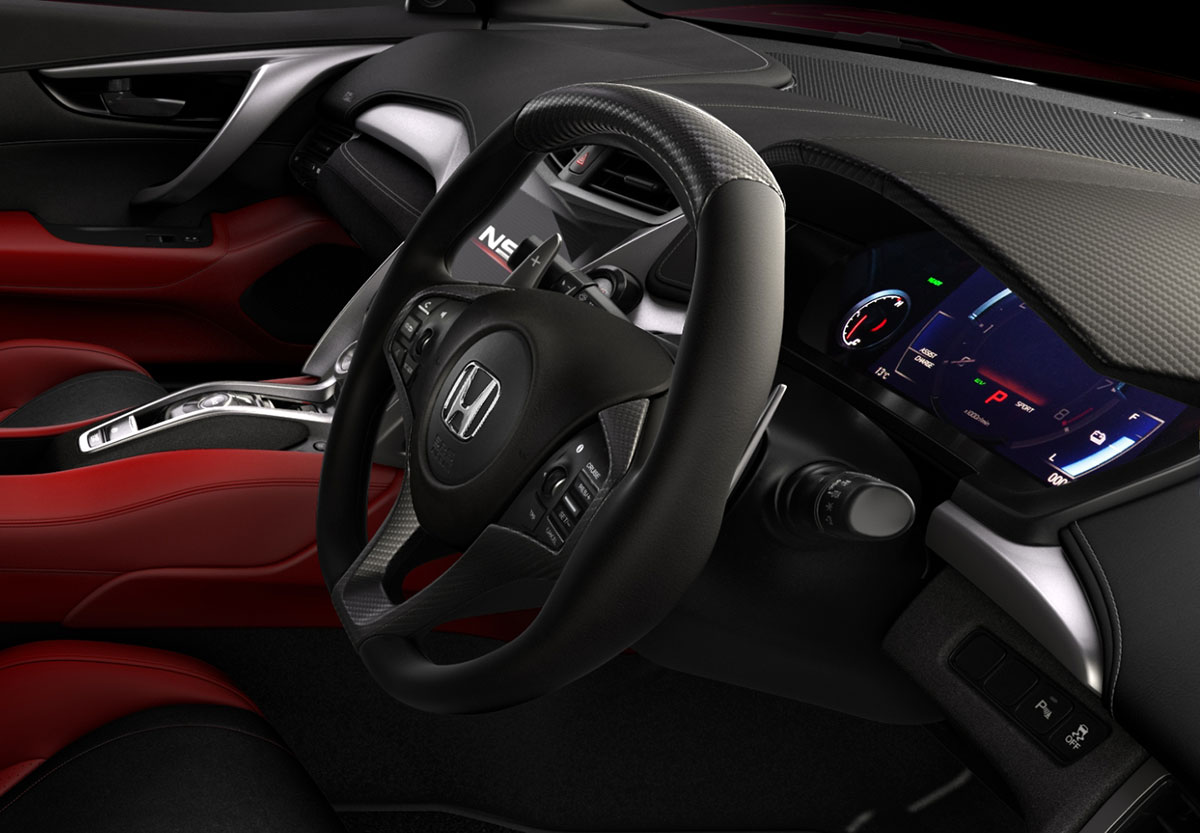 Unlike anything you have experienced.

Sport Mode knows the importance of acceleration, but also of driving efficiently. So it ensures the electric motors and petrol engine work in unison with calm, understated confidence. Just relax and enjoy the ride. 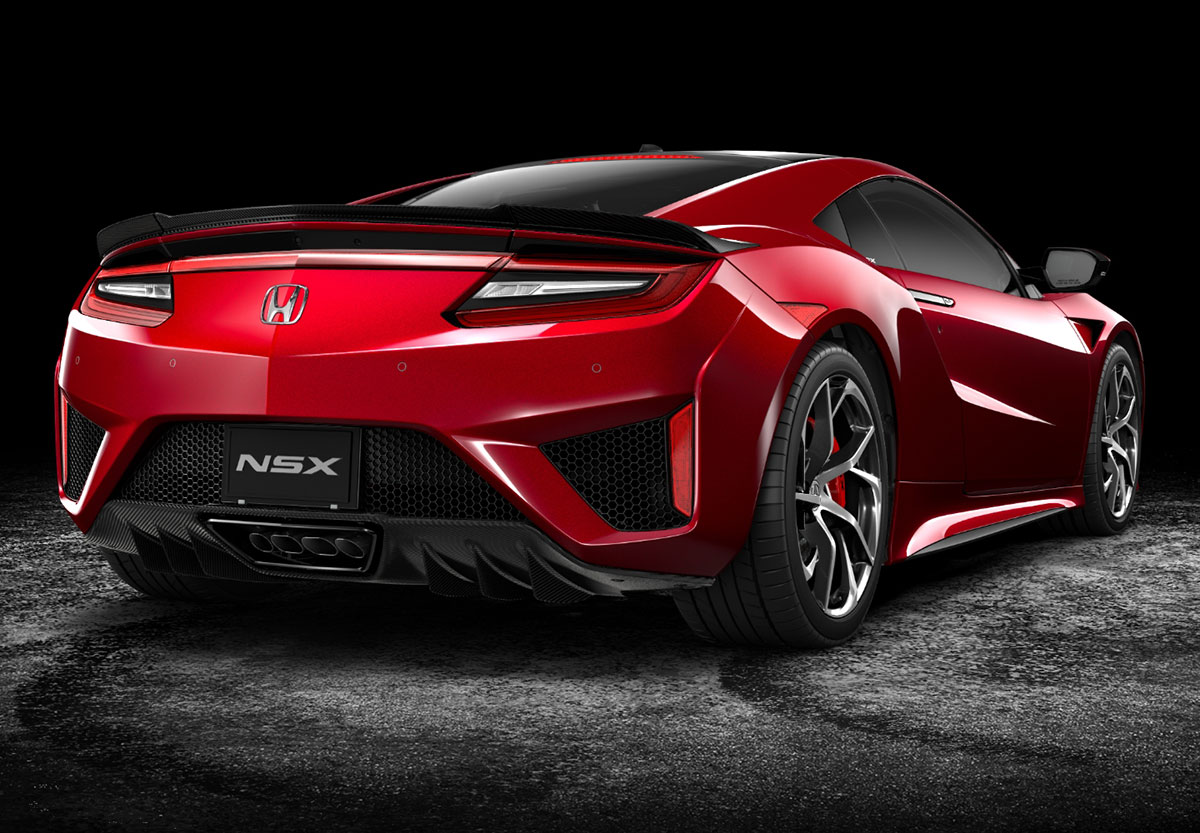 Sport+ Mode unleashes the power of the NSX and every opportunity. Its mission: to teach every bend, hairpin, corner and chicane a lesson, without wasting a second doing so. 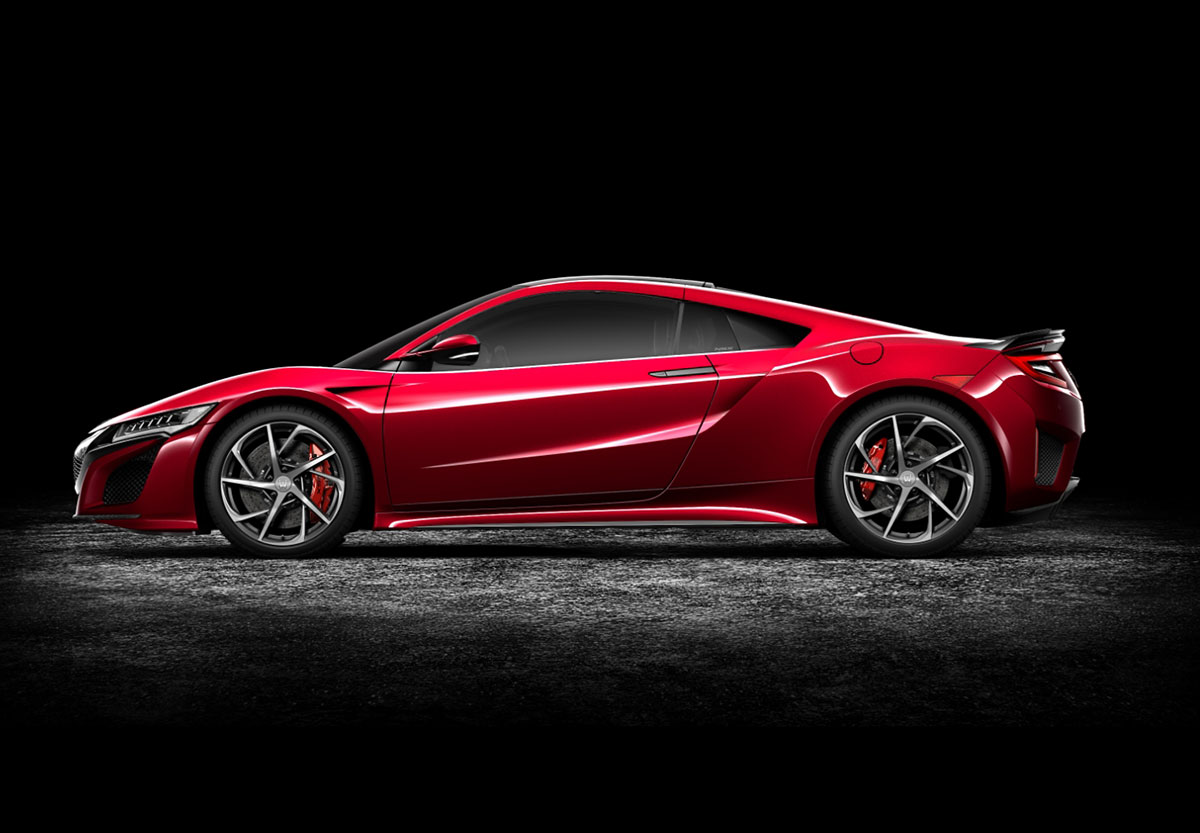 Track Mode helps you find your inner racing driver. Every aspect of the car becomes focused on response, power and giving the road everything it's got. 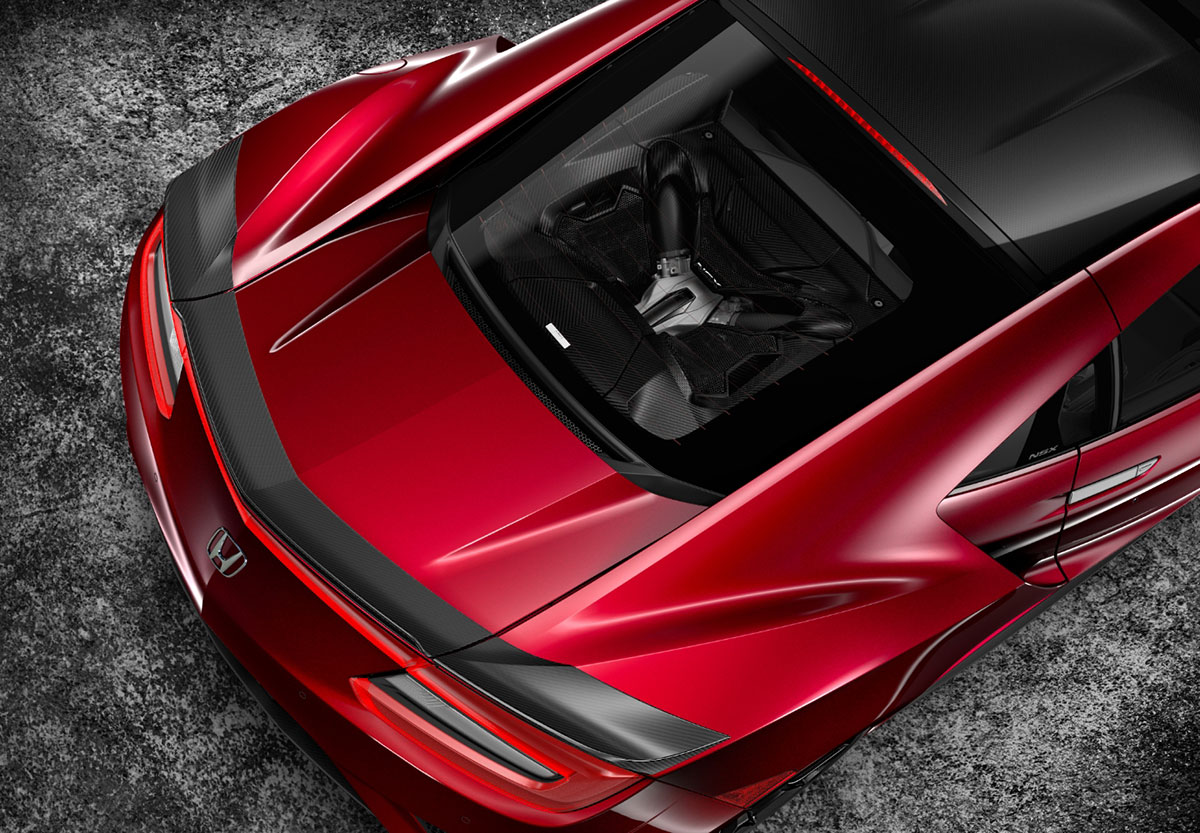 The engineers’ expertise with high-performance engines and dynamic torque-vectoring technologies, including Super-Handling All-Wheel Drive, led to the advanced three-motor Sport Hybrid System with a twin-turbocharged engine that delivers instantaneous yet broad torque. As well as the zero-delay acceleration that produces a G-force unlike anything you have experienced unless you've been in an F1 car. 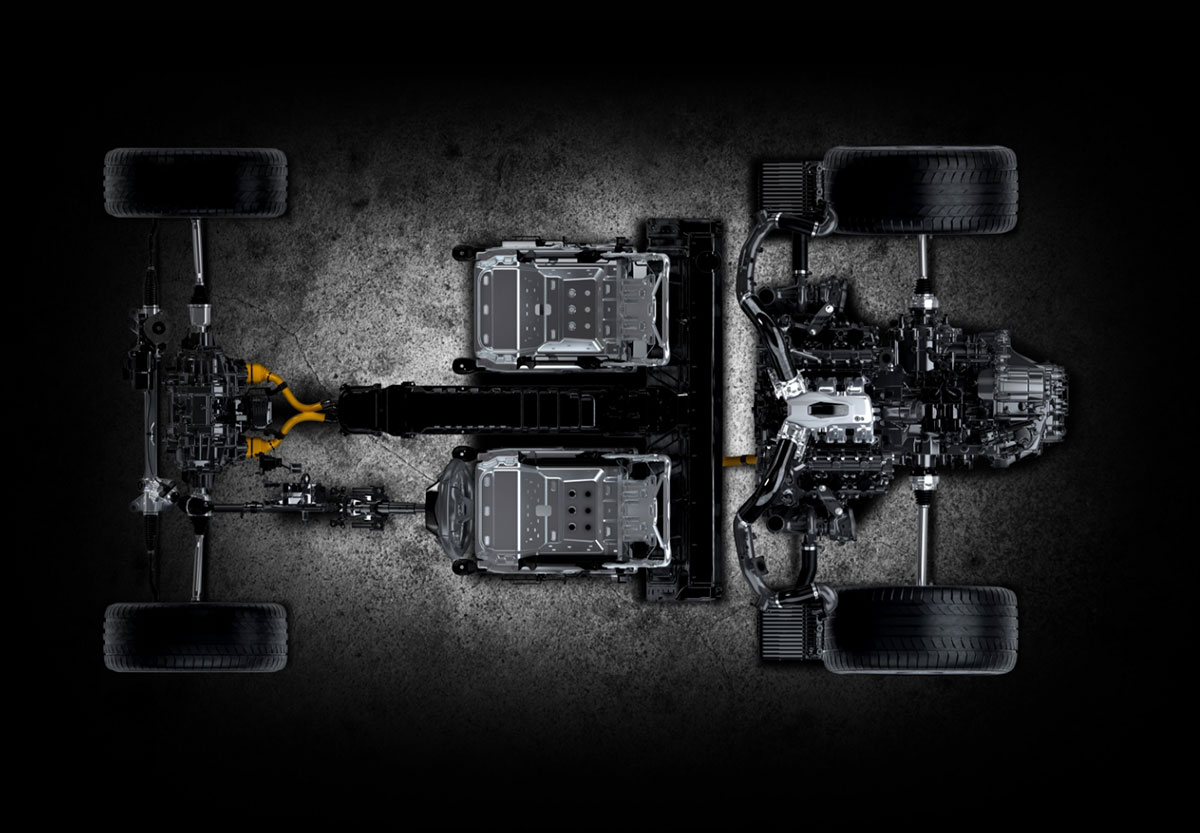 In all-electric mode, NSX is near-silent. Ideal for neighbourhood driving, when quiet is at a premium. 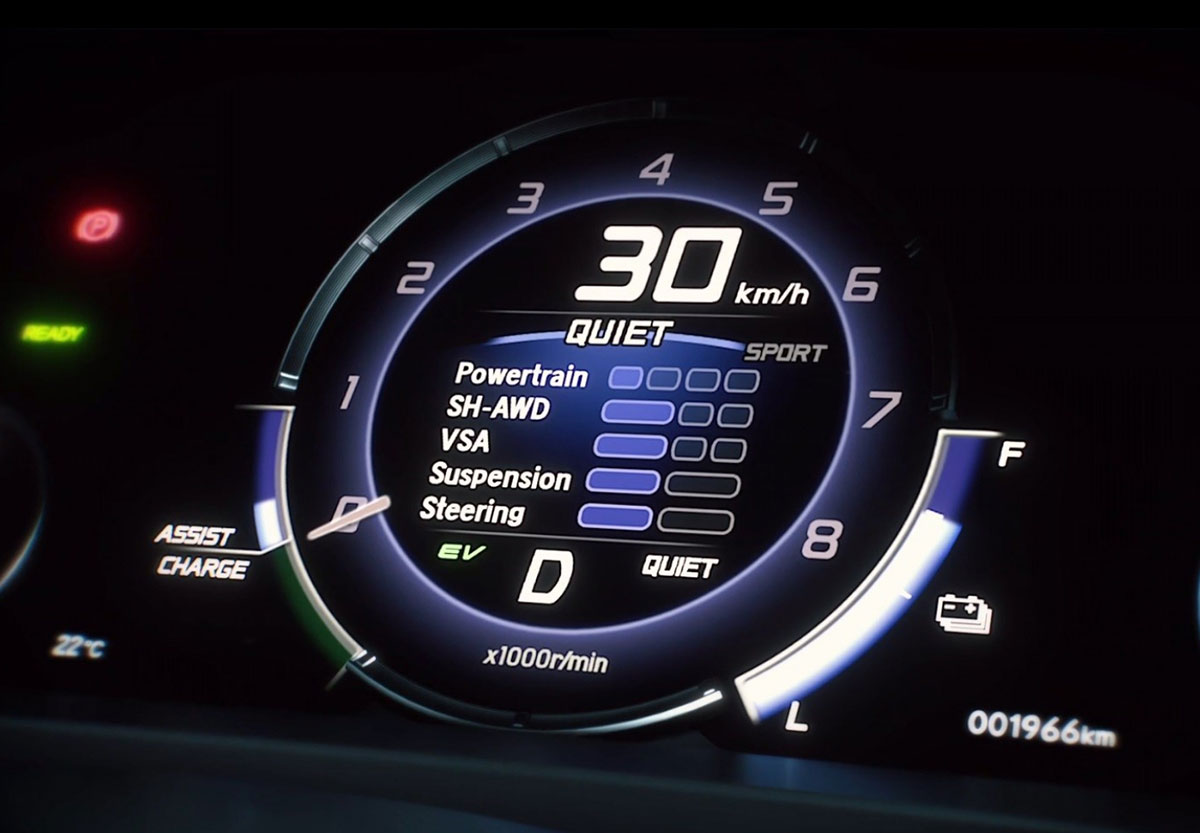 Our revolutionary multi-material, lightweight space frame not only delivers class-leading body-rigidity, but instantly transmits the full feeling of the power unit, suspension and steering directly to the driver. 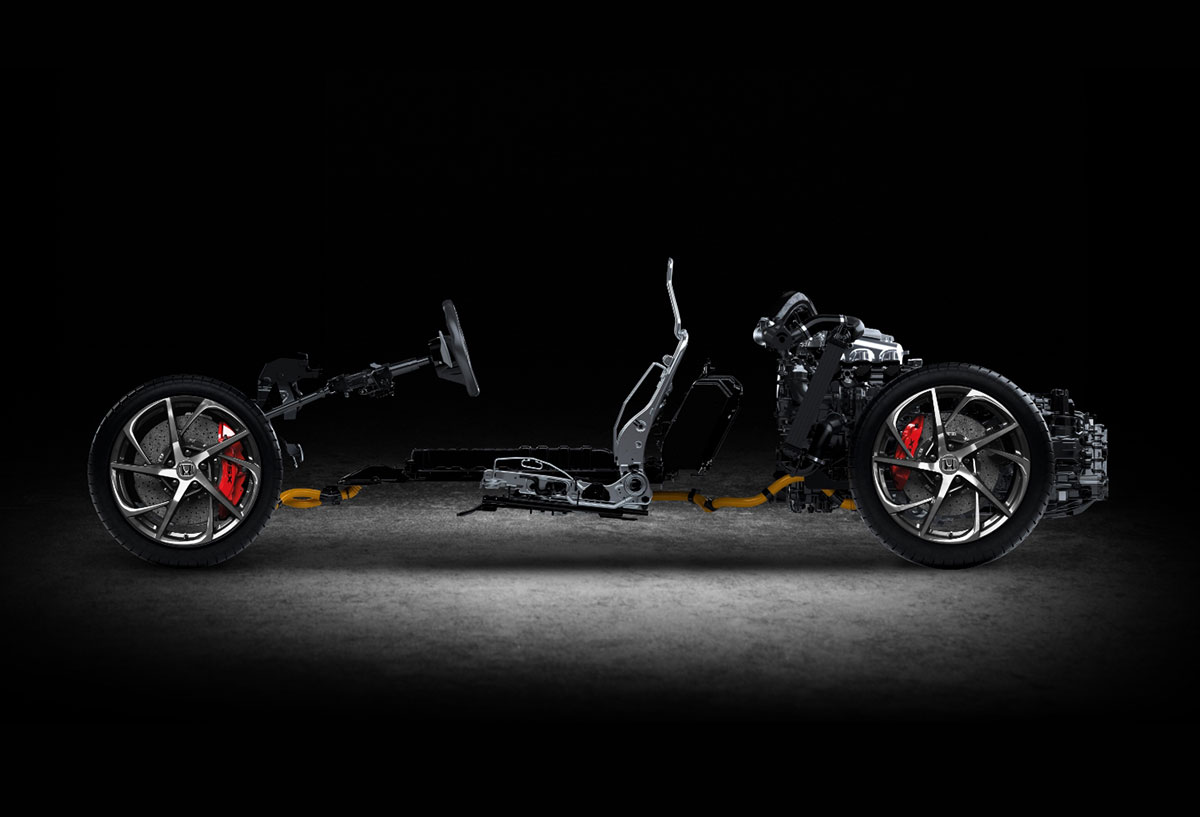 Anchored by a carbon fibre floor, torsional and bending forces are taken up entirely by this ultra-rigid structure, which also utilises advanced joining technologies. 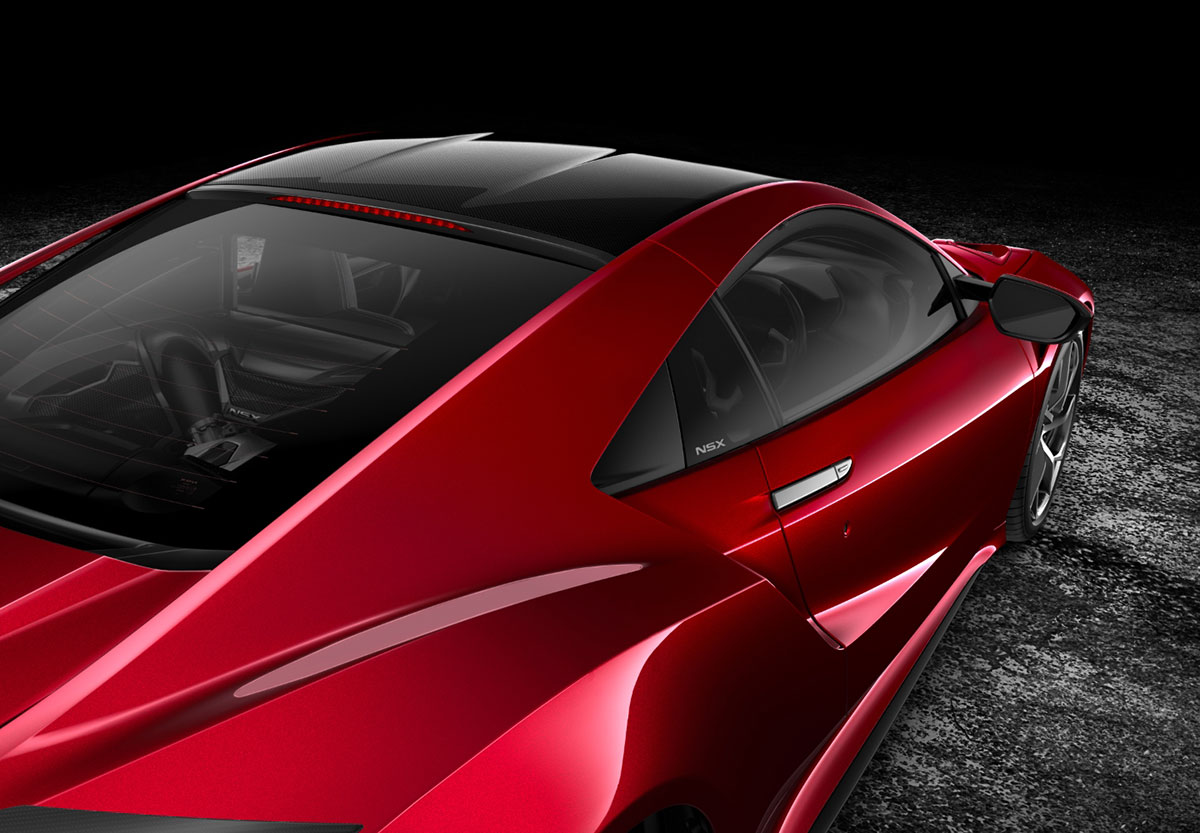 Like the original NSX, we created a ‘Human Support Cockpit’ with exceptional driver control, visibility and packaging, that meets the extreme performance expectations of a modern supercar. 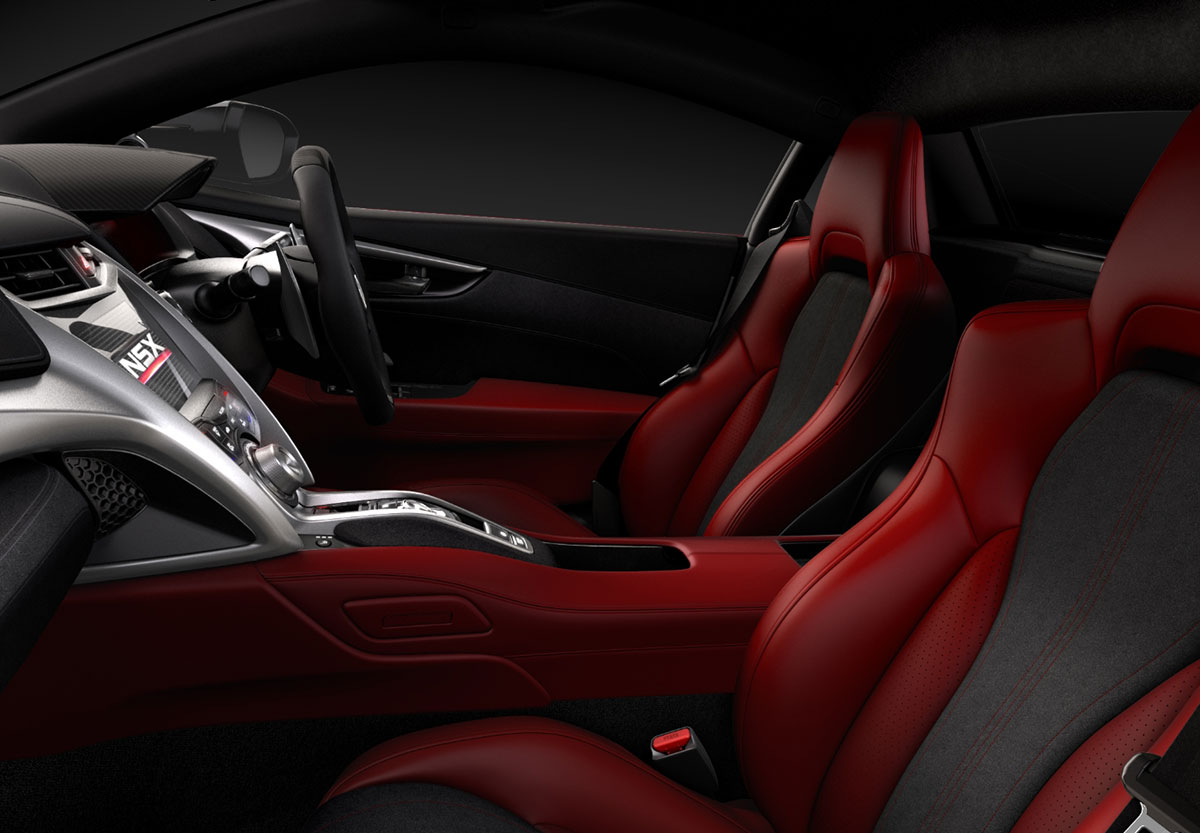 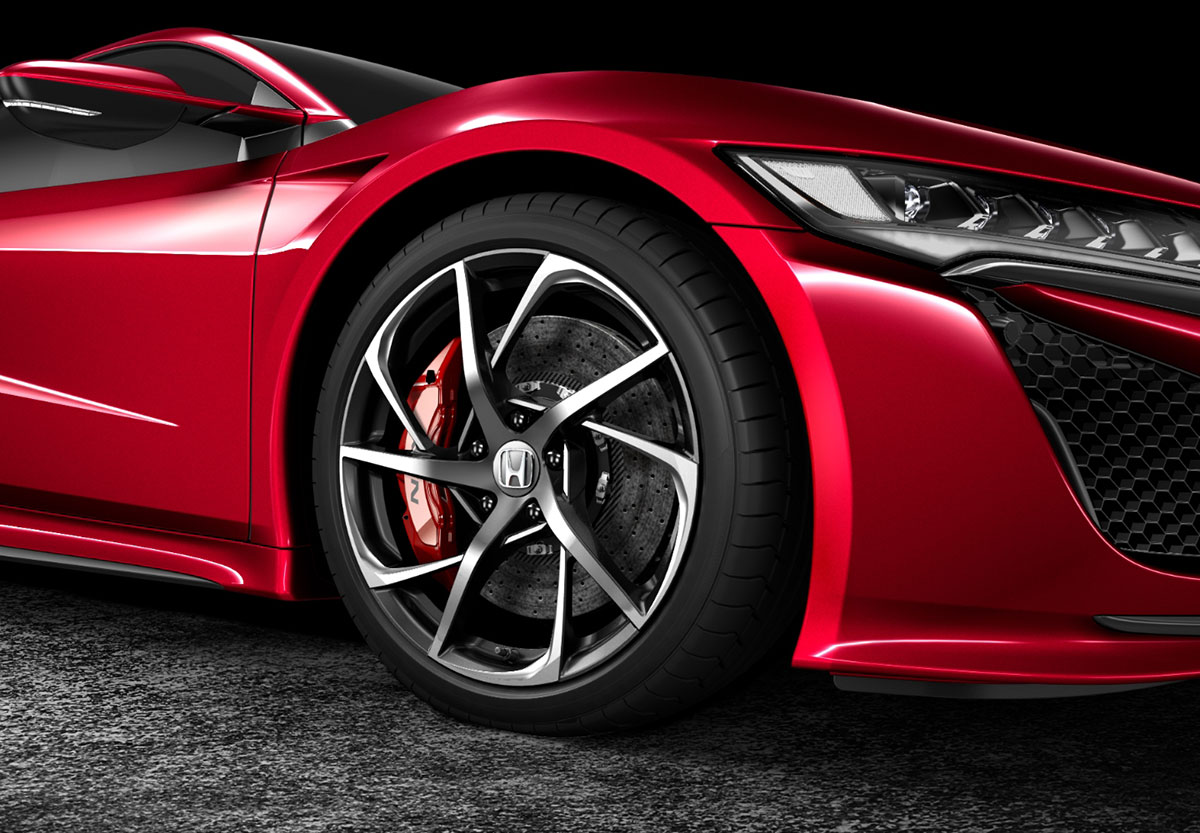 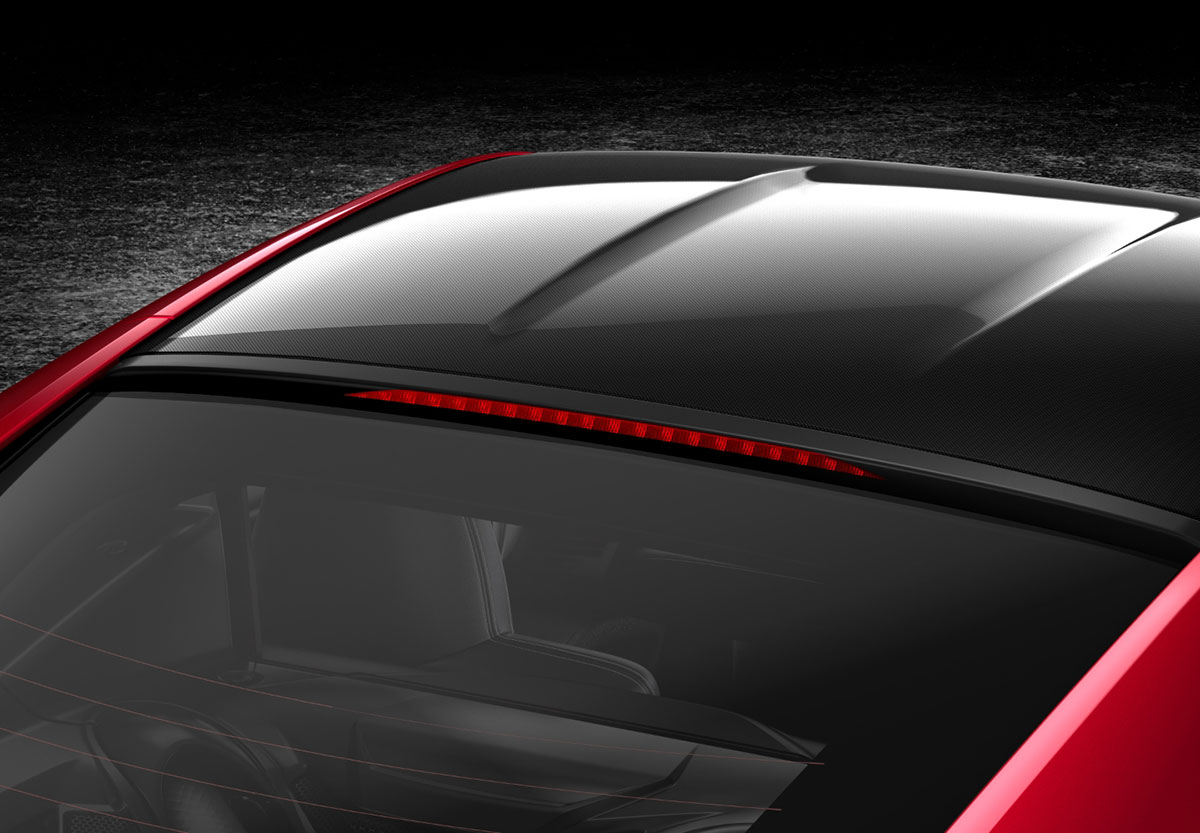 Honda commissioned Italian car designer Pininfarina to design the HP-X (Honda Pininfarina eXperimental), which had a mid-mounted engine configuration. After Honda committed to the project, management informed the engineers that the new car would have to be as fast as anything coming from Italy and Germany .The HP-X concept car evolved into a prototype called the NS-X, which stood for "New", "Sportscar" "eXperimental”. 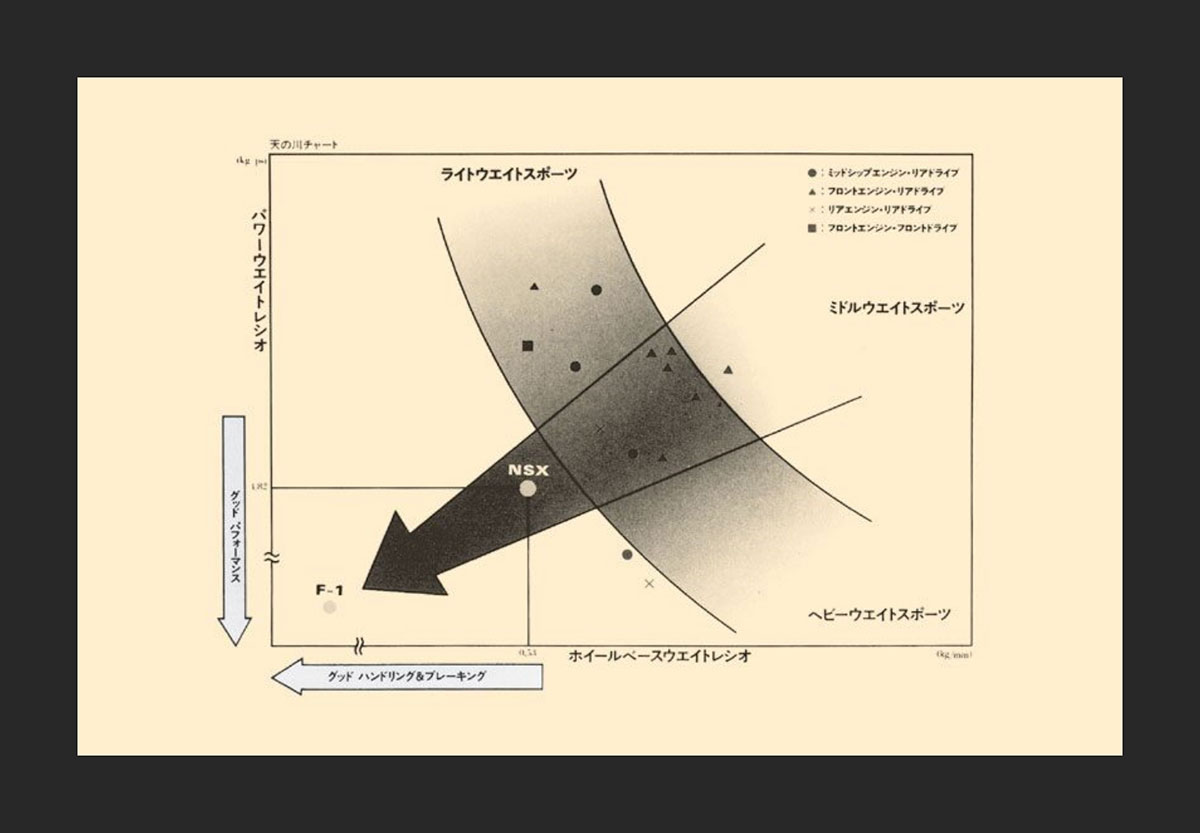 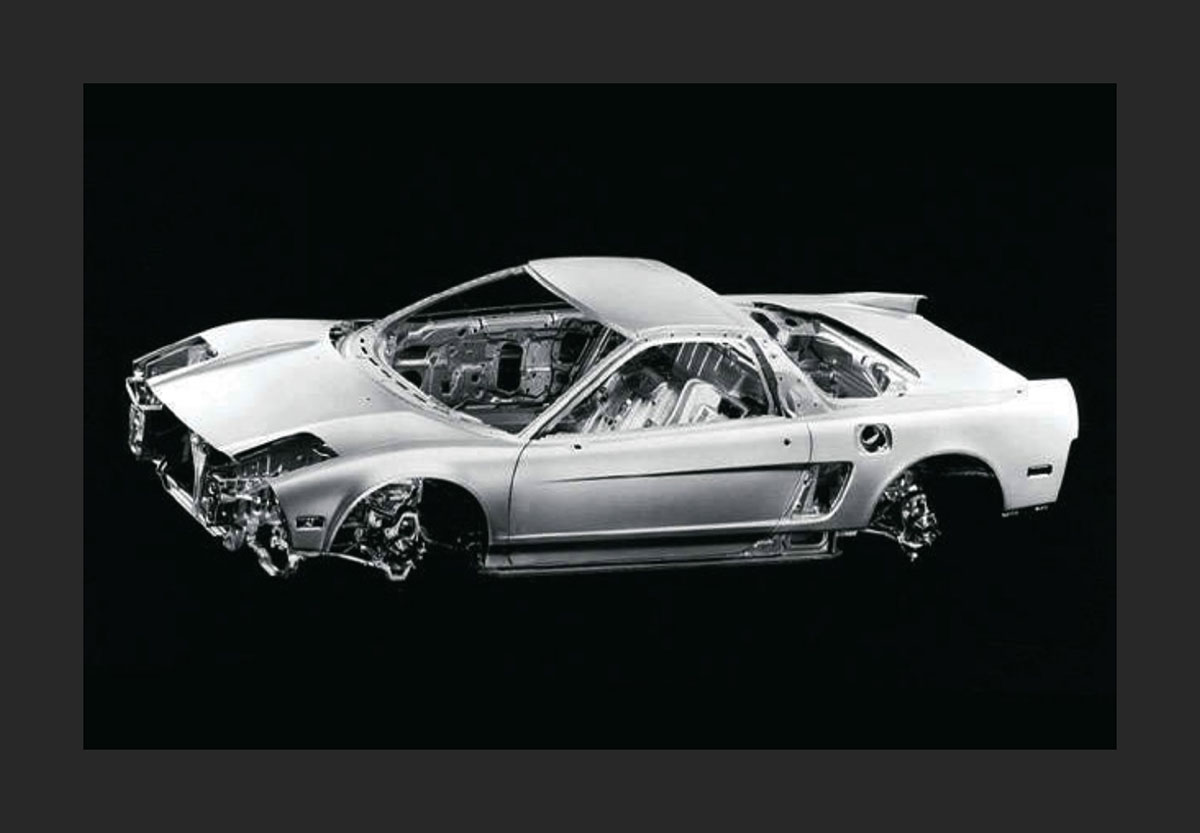 Honda unveils the NSX at the 81st Chicago Motor Show. It is Japan’s first supercar. F1 World Champion Ayrton Senna tests a prototype NSX at the Suzuka track in Japan. His feedback sends the engineers back to the drawing board, determined to deliver world-leading rigidity in the chassis. 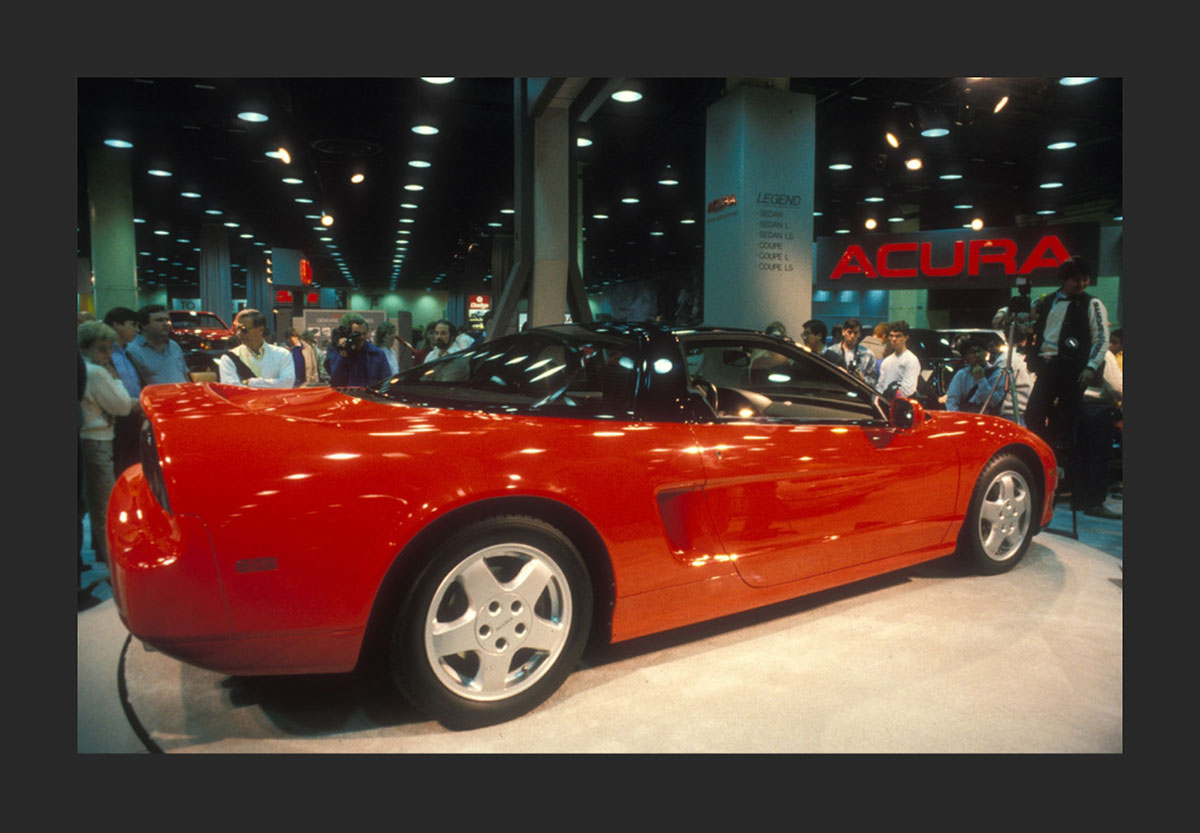 The NSX went on sale in Japan in 1990 at Honda Verno dealership sales channels, supplanting the Honda Prelude as the flagship model. The NSX was marketed under Honda's flagship Acura luxury brand starting in 1991 in North America and Hong Kong. With 1,940 sold in its first year, the waiting list balloons out to three years. 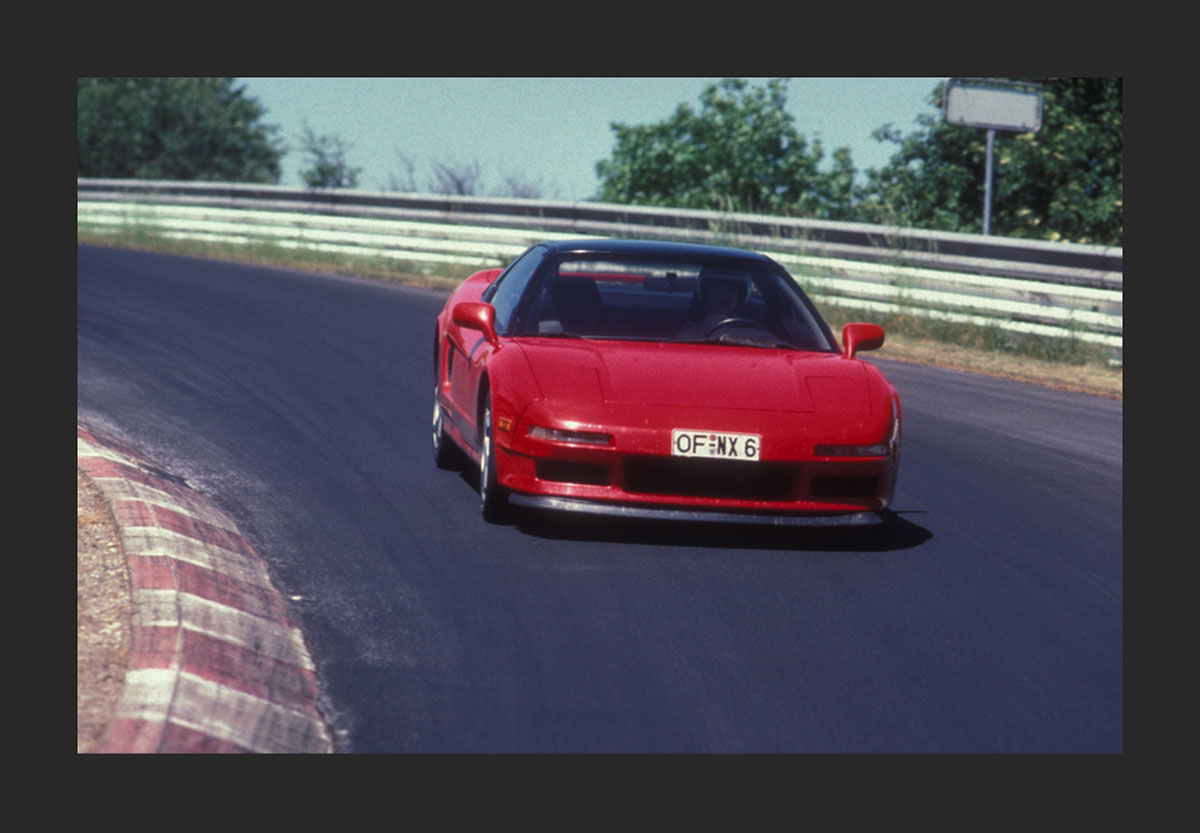 Beginning in 1995, the NSX-T with a removable targa top was introduced in Japan as a special order option and in North America in March that year. The NSX-T replaced the standard coupe entirely as the only version available post 1994 and all NSXs thereafter were in targa form with the notable exceptions of the Zanardi Special Edition NSX in 1999 and a handful of special order vehicles. 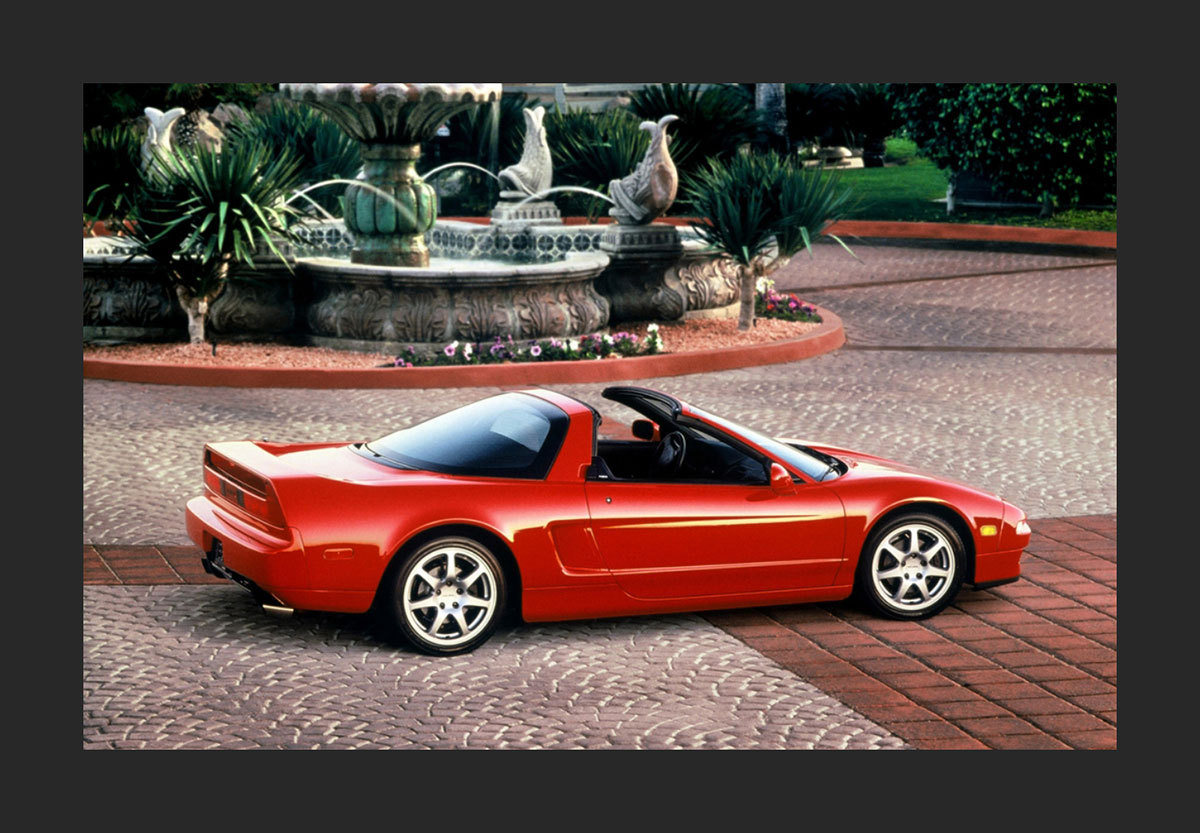 Honda makes its largest innovation in the NSX, replacing the 3.0 litre engine with a more powerful 3.2 litre DOHC V6 engine, producing 290 horsepower and 304 Nm torque. The exhaust manifold was reconfigured and made of stainless steel header pipes for improved performance and lighter weight, a key contributor to the 20 additional horsepower drawn from the new engine. 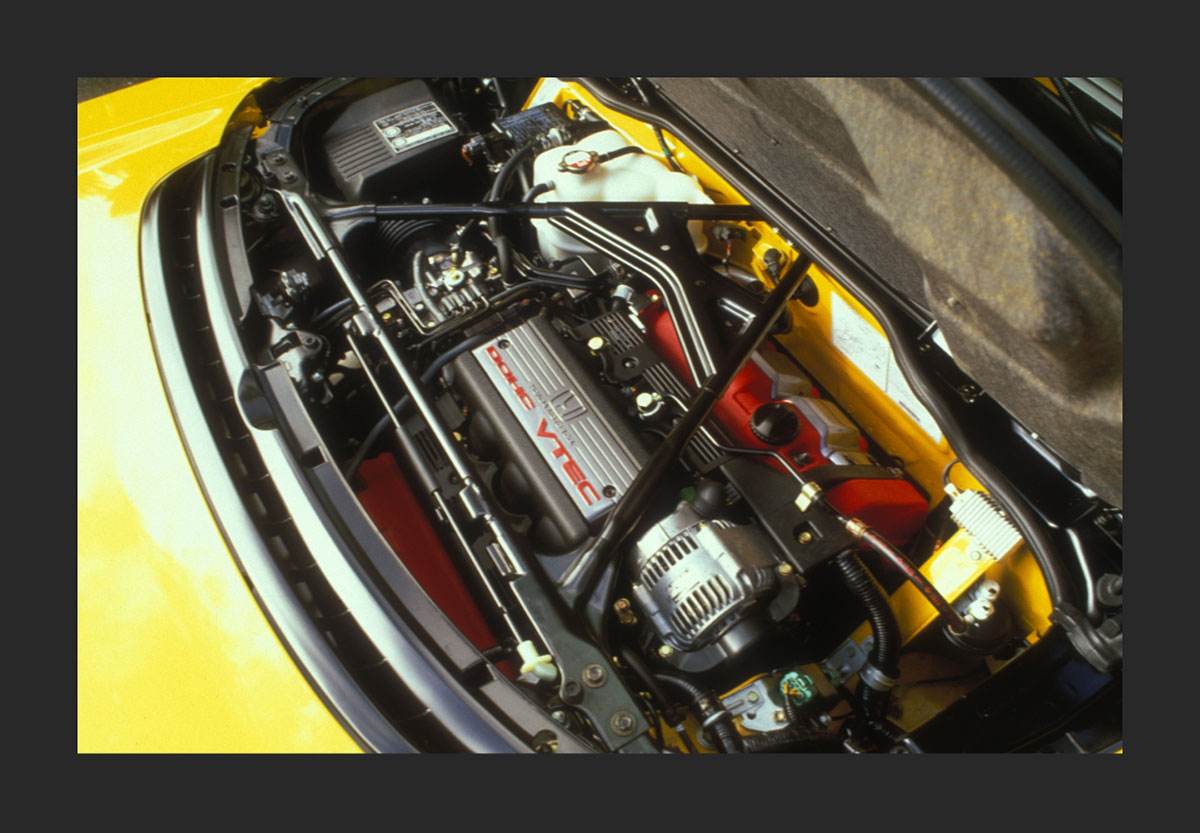 The original NSX body design received only minor modifications from Honda in the new millennium when in 2002 the original pop-up headlamps were replaced with fixed xenon HID headlamp units along with slightly wider rear tires to complement a revised suspension. A second iteration of the NSX-R was released in 2002, again exclusively in Japan. As with the first NSX-R, weight reduction was the primary focus for performance enhancement. 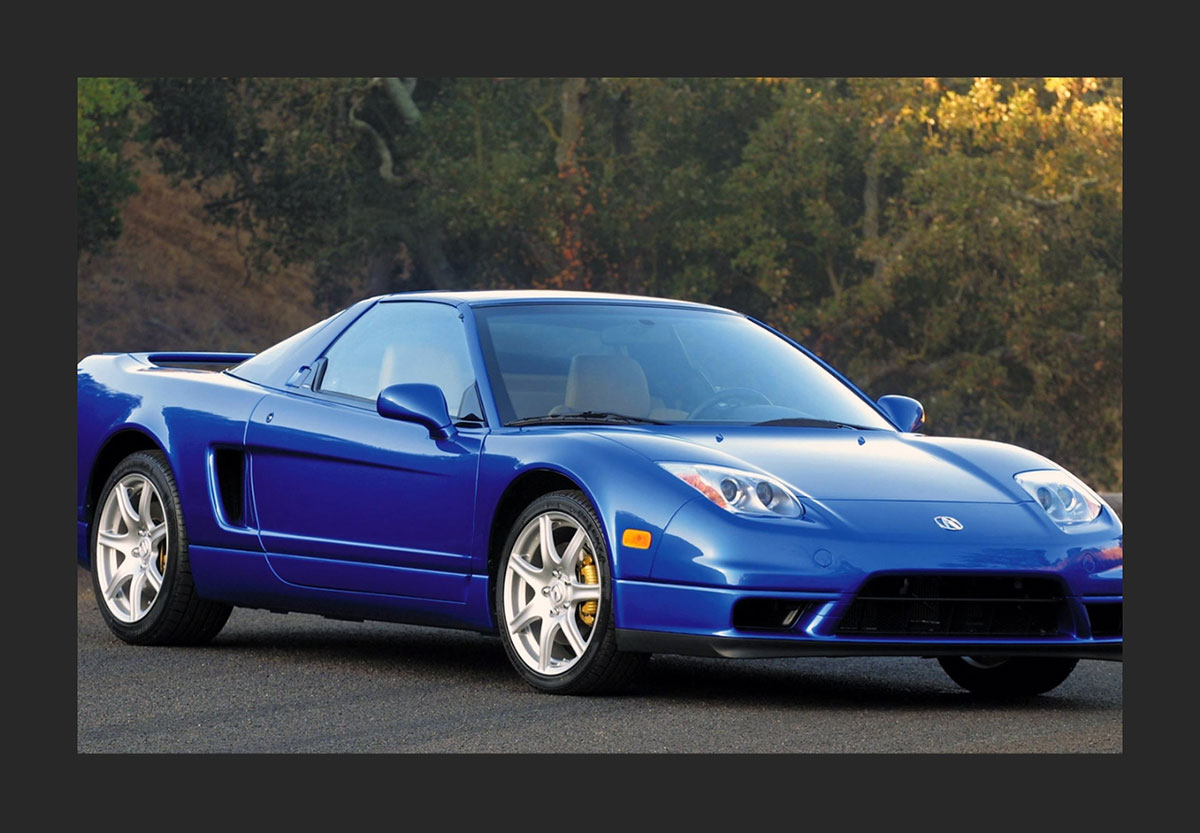 Honda announces the all-new 2012 NSX Concept at the International Auto Show in Detroit. In the film The Avengers, Robert Downey, Jr. (playing the role of Iron Man) was spotted in an exotic sports car based on the new NSX, made specifically for the film, rather than the Audi R8 he previously drove in Iron Man and Iron Man 2.The car itself was built by Trans FX using an existing 1992 NSX. 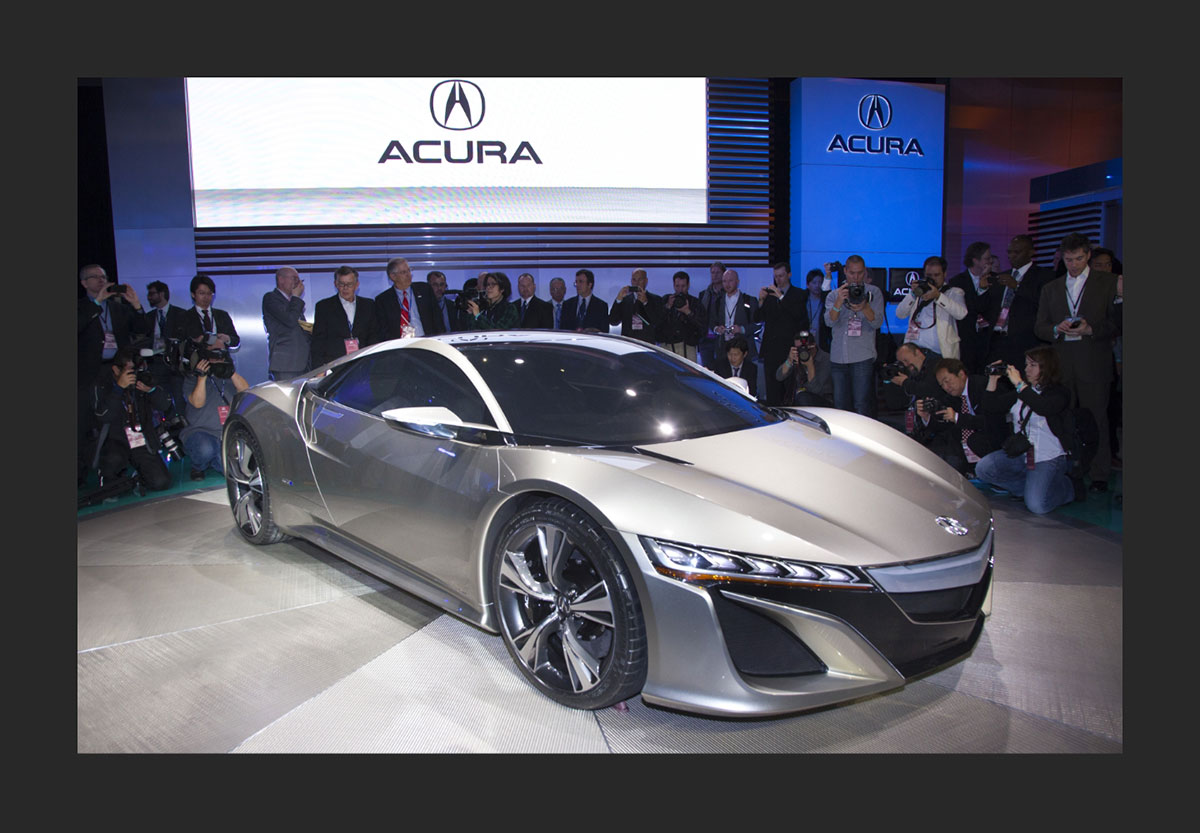 The production model NSX was revealed under the Acura badge at the North American International Auto Show in Detroit. Production of the new NSX commenced at Honda's new Performance Manufacturing Center in Marysville, Ohio, which is housed inside Honda's former North American Logistics facility and located in the midst of Honda's existing R&D and production engineering operations. 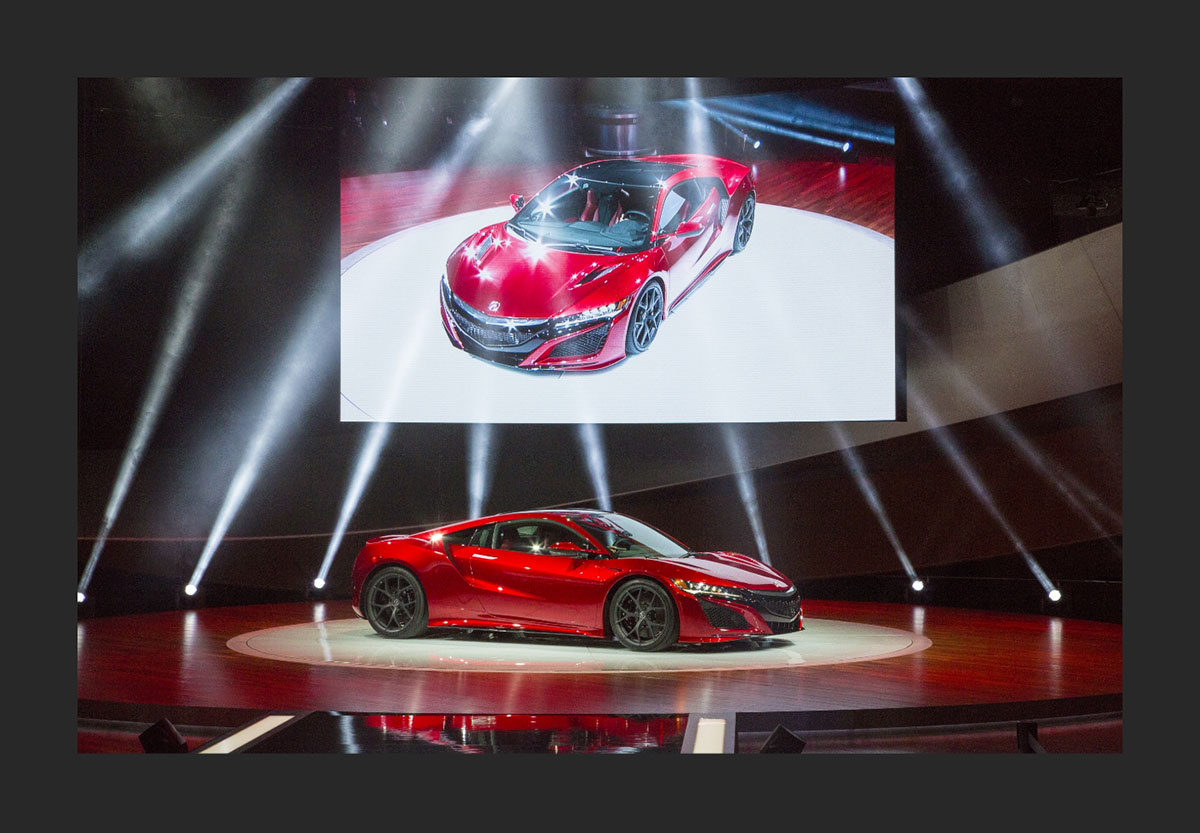